The Quad Cities were originally called the Tri Cities: Rock Island, IL; Moline, IL; and Davenport IA. The term Quad Cites became popular when East Moline experienced substantial growth. As the city of Bettendorf grew, the term Quint Cities surfaced but did not catch on to describe the area.

As a result, Quad Cities remains as the identifying title for this region of Illinois and Iowa in which the Mississippi River runs east to west, where the fast moving Rock River flows into the Mississippi. Productive soils and high quality timber also helped provide an economic motive for settling in the area. The region is considered home for over 400,000 residents with widely varying economic, cultural, religious and educational backgrounds.

The Quad Cities' climate, natural resources and topography have been naturally suited to provide an excellent environment for human development throughout history. The merging of the Rock River to the magnificent Mississippi River has helped with transportation, food, and commerce for all that have lived in the area. The first evidence of humans dates back to around 200 BC when Woodland tribes occupied the area. Their burial sites are still visible today.

Later, Sauk and Fox Indians were living in the area. A community of the Sauk was located where the Rock River empties into the Mississippi River. This village was one of the largest in North America with 6,000 to 7,000 inhabitants.  One of the many villages of the Fox was located where the downtown Rock Island now stands.

In 1804, the United States government purchased Arsenal Island from the Sauk and Fox Indians. As more and more European settlers moved into the area, Fort Armstrong was established on Arsenal Island to protect the settlers and provide a location for trading. As the Fort grew in importance for commerce and in population, a thriving river town developed. The town’s original plat was filed in 1835 under the name of Stephenson and became Rock Island in 1841.

Early growth of Rock Island was due to the railroad bridge being built across the Mississippi which brought widely varying industries including farm equipment, lumber, railroad supplies, and pottery.

One of the early residents in the area of the future Rock Island was David B. Sears who settled here in 1836. Beginning with the purchase of a strip of land along the Mississippi River, he soon owned over 1,160 acres in what was to become another of the quad cities.  The town was platted in 1843 by Sears and several other businessmen. Two plats were drawn up and the name Hesperia, meaning Star of the West was written on one plat and Moline, meaning Mill Town on the other. Moline was declared to be the rightful name.

Colonel George Davenport, a veteran of the several wars including the War of 1812 built one of the first permanent buildings in Stephenson. He had settled in the area in 1816 and purchased land as part of a consortium which was to become the original site of Davenport, a town across the river from Stephenson.

The site, which had been sold to the company of businessmen by Antoine Le Claire a year earlier, was surveyed in 1836. Shares in the company were then sold to investors wanting to be a part of Davenport. The city was incorporated in the winter of 1838 and 1839. A new charter was given in 1843 and then again in 1851. The new town’s location on the bluff overlooking the river was admired by many.

Based on an agreement with William and Joseph Bettendorf to move their iron wagon business to Gilbertown from Davenport in 1900, the city gave the brothers 70 acres of land on the riverfront. In 1903, the name of the town was changed in recognition of the contribution the new factory had made to the town’s growth. Bettendorf’s population growth did not take off until the 1950s and 1960s, as more manufacturing, especially Alcoa, came into the area.

East Moline was started on land that was part of Bailey Davenport’s estate. Mr. Davenport was a son of Colonel George Davenport. The East Moline Land Company developed the new town which was adjacent to the struggling town of Watertown. The company had an auction on September 12, 1895 to sell lots in the new town. Unfortunately, economic conditions at that time greatly hurt sales on that day and for several years after.

In 1900, Deere and Company built its first large factory in East Moline.  Factories for other products and goods soon followed and the population grew. East Moline incorporated as a village in 1903 and then as a city in 1907. In 1914, Watertown was annexed into East Moline.

There are also many smaller towns in terms of population in the area that contribute to the excellent standard of living that can be found in the Quad City area.  All the towns and cities are found in and around the natural beauty of the area. The rivers, hills, valleys, woodlands, fields and everything in between are well worth exploring. 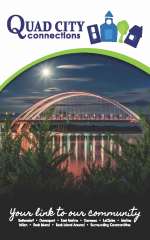